Good Friday Blog: May the Lamb That Was Slain Receive the Reward of His Suffering
Revelation 7:9-12, the Holy Spirit peels back the curtains of time and space and we are given a glimpse into eternity.  Here we see the great and final end to which all of history is moving: the endless, ever-increasing enjoyment of God and His Son among redeemed worshipers from all nations, tribes and tongues. We see the Lamb of God finally receiving in full, the reward of His suffering.
Nicolas Von Zinzendorf was born in 1700 in Dresden Germany. He went on to found a Christian community called “Hernhut” which meant the Lord’s watch. Hernhut eventually became part of the Moravian Church movement which was best known for its unquenchable missionary zeal.
In 1727, they started a ‘round the clock’ prayer watch that lasted unbroken for 100 years.  At this time, there were 300 people in the community and various ones covenanted to pray for at least one of the 24 hours in a day.  In 1792, 65 years later, with the prayer watch still unbroken, the little community had sent out 300 missionaries to the unreached people of the West Indies, Greenland, Turkey, Lapland, and North America.
QUESTION: What was driving them to be so radically committed to making Jesus known among the nations?
ANSWER: It was a deep reverence and awe for the Savior based on the blood that He shed to purchase the nations.
You see, when Zinzendorf finished college he took a trip through Europe.
Something unexpected happened… 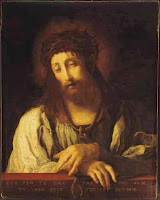 At a museum in Düsseldorf, he came upon a painting entitled, “Ecce Homo”, Latin for behold the man.  It was a portrait of Christ’s face, with the crown of thorns upon His brow and blood running down His face. This moment was utterly life-changing for Zinzendorf, he said to himself, “I have loved Him for a long time, but I have never actually done anything for Him.  From now on I will do whatever He leads me to do.”
For the rest of his life, the blood of Jesus had a central place in his life and ministry.  The story goes that when the first two young Moravian missionaries boarded the ship in Copenhagen to sail to the West Indies, perhaps never to return, (they had sold themselves into slavery) they lifted their hands as if in sacred pledge and called out to their friends on shore:
“MAY THE LAMB THAT WAS SLAIN RECEIVE THE REWARD OF HIS SUFFERING”