What I Wish I Knew When I Became a Missions Pastor

Hello my name is Matthew Ellison and I serve as the President of Sixteen:Fifteen but before I started working with Sixteen:Fifteen I served as the Mission Pastor of Calvary of Albuquerque for over 10 years. Those experiences not only helped shape the vision of Sixteen:Fifteen, they also gave me a passion to serve local churches in the fulfillment of the Great Commission. I’d like to share some things I wish someone would have sat down and told 26-year-old me when I became a mission pastor:

1. The Criticality of Missions Vision Buy In from Key Church Leaders

One noted mission pastor has said: “Members of a congregation can be a catalyst for missions envisioning…but until senior leadership has embraced the vision, we are not yet dealing with the process of a church. An important milestone is for the church as a WHOLE to reach a place where it can fully embrace the idea of focusing its resources, giftings, energies, and financial resources to reach the world.”

If you are building your church’s mission vision without the input and affirmation of key church leaders, if you are building it in a silo – you are likely building a vision that will not permeate the congregation, and it probably will not survive if and when you move on from the church. 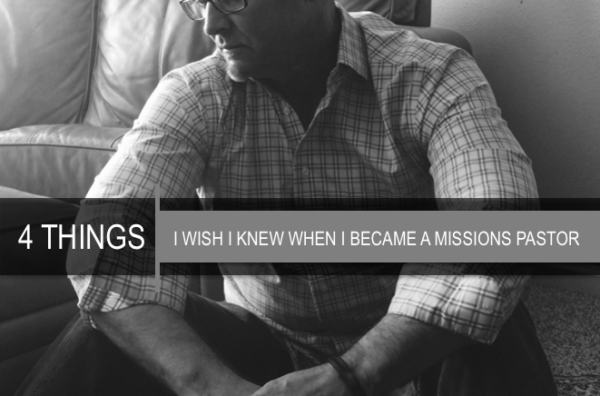 2. Everyone Is Not a Missionary

In the last decade, it has been increasingly popular to consider that every follower of Christ a missionary. Though it is counterintuitive, it is my conviction that this does not lead to more missions work being accomplished but less.  We have so lowered our standards for normal Christian living that we have come to think that anything altruistic or evangelistic is missions. When in fact, this is simply the work of every disciple of Jesus.

The danger in the discussion about every follower of Christ being a missionary is that the pursuit of reaching all the peoples of the world can be obscured.  Now I am eager for Christ’s followers to “live on mission” wherever they are but also to preserve a place for the Biblical basis for reaching the unreached.

Is everyone a missionary? The answer to this question is not merely semantical, it is fundamental.

When I became a missions pastor, the church I served at did not have a strategic, cohesive, compelling missions vision at the time. We believed in missions and we supported missions, but our missions activities were basically an every man for himself, independent contractor type of mentality.  Every ministry leader that wanted to do missions could essentially do what they thought was right in their own eyes, and it wasn’t like they were doing bad things, but missions was in a bunch of silos. Now imagine if I, as the missions pastor, decided to start a new youth ministry initiative when we already had a youth pastor? Or a new children’s ministry initiative? Well of course, I would have met with resistance and rightly so.

It is very hard to create a cohesive, church-wide missions vision when there is an independent contractor approach to missions.  I believe that one of the key roles of a missions pastor is to work with other key ministry leaders to work towards an integrated missions vision that mobilizes everyone to participate in the church’s global vision, but that is far different from simply allowing every ministry to do their own things when it comes to missions.

4. When Zeal for Worship Is Weak,  Zeal for Missions Will Be Weak

The word, therefore queues us to consider that what is going to be said next, is based upon what was previously said.   The therefore is an inference to His authority. Our Great Commission mandate is based upon the power and greatness of Jesus Christ. Christ is great! – For this reason, we go. We do not go principally because people have needs. Yes, people do have needs – tremendous needs, and that is a part of the rationale behind our going, BUT we go fundamentally, because there is no one, absolutely no one as Great as Jesus – He the One, Almighty, true and living God.  He is worth declaring, worth proclaiming, worth obeying – We go because Christ is great!

One pastor has said, “We do not commend what we do not cherish.”  That makes sense, doesn’t it? If we are not stunned by the beauty and majesty of Christ…if we are not gripped by His greatness, how will we ever rouse the kind of fervent desire necessary to go make disciples of all the nations?  Indeed those who commend Him are those who cherish Him – those who are madly in love with Him.

What does this look like?  Well, I believe that preaching the preciousness of Christ is the best way to ignite missions passion because there is a direct corollary between prizing Christ and having a passion for the nations.

So, what do I wish I knew when I became a missions pastor?…

For more information on how Sixteen:Fifteen can help unleash your church’s potential to reach the nations, call to talk with a Church Coach at 505-248-1615, email info@1615.org or www.1615.org to visit our website.