Book Review: Let the Nations be Glad by John Piper 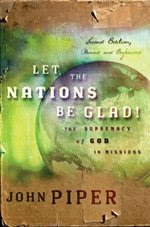 This is an excellent book on the ultimate goal of missions by author and teaching pastor Dr. John Piper. Piper clearly demonstrates from the Bible that the ultimate goal for the church is not missions but the worship of God. As he puts it, “Missions exists because worship doesn’t.” So he rightly concludes that worship is ultimately the goal of missions. But more than that, worship of God becomes the fuel for missions. He goes on to persuasively argue that the completion of the missionary task involves seeing worshipers from every unreached people group. He also deals with important topics concerning suffering in missions, prayer as a wartime tool, eternity in hell, and the atonement of Christ and its implication for missions.
Duane Litfin, president of Wheaton College, gives his recommendation for this book: “If I had to choose one book on missions, Let the Nations be Glad would be it. Don’t read it unless you are willing to have your eyes reopened to the highest possible motive for being about the business of reaching the world for Christ.”

Get Let the Nations Be Glad! 2nd Edition NOW