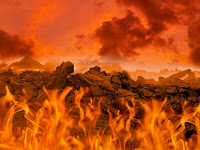 by Matthew Ellison
IS HELL REAL?  This question has been debated in the Christian church for over two millennia.  The recent release of Rob Bell’s book entitled, “Love Wins,” and the subsequent barrage of commentary about the topic have again surfaced the debate in force.  Bell thinks he knows—or should I say, he thinks we can’t know for certain, because he believes that the Biblical discussion of salvation is contradictory.  This has incited many Evangelicals to contend in the public arena that Jesus Christ is man’s only hope and that the eternal punishment for not believing in Him is conscious, eternal, terrifying torment.  I thank God for those who have taken this stand, it is my stand, and more importantly it is the historical Biblical stand.  I must confess however, that this debate has caused serious consternation in my heart, not over whether or not hell is real, but rather why so many Evangelicals who claim to believe in hell and even voraciously defend the doctrine seem to pay so little attention to the unreached people groups sitting in darkness and the shadow of death.  John Piper (who, by the way, is a champion for God’s missionary enterprise) in his must read book, “Let the Nations Be Glad,” poses three questions and then answers them Biblically:

1.  Will anyone experience eternal and conscious torment under God’s wrath?
2.  Is the work of Christ the necessary means provided by God for eternal salvation?
3.  Is it necessary for people to hear of Christ in order to be eternally saved?

He writes, “Biblical answers to these questions are crucial because in each case a negative answer would seem to cut a nerve of urgency in the missionary cause.”  Then in usual Piper style he unpacks biblical passage after biblical passage, relying on Scripture’s intrinsic authority to tell us yet again that the answer to all three of three questions is yes.

A tale is often told of a preacher who said that if there really was an eternal hell, he would crawl on his hands and knees along broken glass the entire length of Britain to rescue a single sinner from such a fate. It makes sense.  If men are truly bent towards hell by nature, if Christ is their only hope of escaping eternal, conscious torment, then one would think that Evangelicals would be hell-bent on participating in the completion of history’s greatest movement, namely the ingathering of the elect from all tribes and languages and peoples and nations’ until the full number of the Gentiles comes in and all Israel is saved.

God has often used something Francis Schaeffer once said to graciously afflict me; I hope it does the same for you, “Biblical orthodoxy without compassion is surely the ugliest thing in the world.”  Do you believe in the Biblical doctrine of hell?  If so, what the hell are you doing about it?