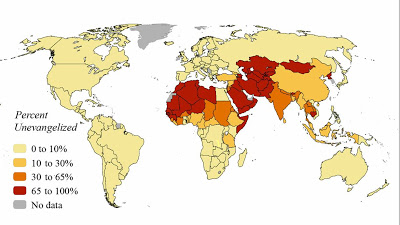 In April, Sixteen:Fifteen’s good friend, Mike Potter, Lead Pastor at Foothills Fellowship,  a church we helped with their Great Commission strategy, wrote a very informative blog post that we’d like to share…

According to an article in the November 2013 edition of Christianity Today, 400,000 Christian missionaries were sent in 2010 from one country to another.  The breakdown of who sent them and who received them is very interesting – and reinforces the missions strategy of my church.  Here are a few interesting and revealing stats:

32,400 is the most missionaries any country received – making the United States the #1 receiving country of missionaries.

Among other things, these numbers reveal that the large majority of missionaries are still being sent to countries where the gospel of Jesus has already taken root and where an indigenous church already exists.  And this concerns me – and it concerns many others who have a heart for missions as well.

I’m not saying that already-reached countries should not receive any missionaries, but what I am saying is that countries where there are large unreached people groups should be considered first.

The problem with countries like this is that they are difficult places to get into and to live, but the difficulty should not stop mission agencies and missionaries from trying.  At my church, we’ve committed ourselves to spending our mission dollars on and sending our missionaries to the unreached people living in hard to reach areas.

This has come with its set of unique challenges, but we’ve also seen the gospel break-thru among people who have never heard the gospel before.  As a matter of fact, among an unreached people group we targeted 20 years ago, we’ve seen an explosion of the gospel take place – to the point where now over 1000 home churches exist!

If you are a pastor, a missionary, or a Christian with a heart for missions (something every Christian should have, by the way), please consider focusing on the 4 billion people in this world who have not been reached with the gospel rather than focusing on the 3 billion who have. 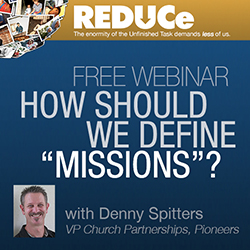 JOIN US for our next FREE WEBINAR where Sixteen:Fifteen and Pioneers presents “How Should We Define Missions”. Denny Spitters from Pioneers will explore the implications of the philosophy that EVERY follower of Christ is a missionary. CLICK HERE TO REGISTER – September 11th 12:00-1:00 MDT

For more information on how SIXTEEN:FIFTEEN can help unleash your church’s potential to reach the nations, call to talk with a Church Coach at 505-248-1615, email us or www.1615.org to visit our website.